Home / Featured Articles / ABOUT THE COVER

The Transformational Agenda on December 20, 2015 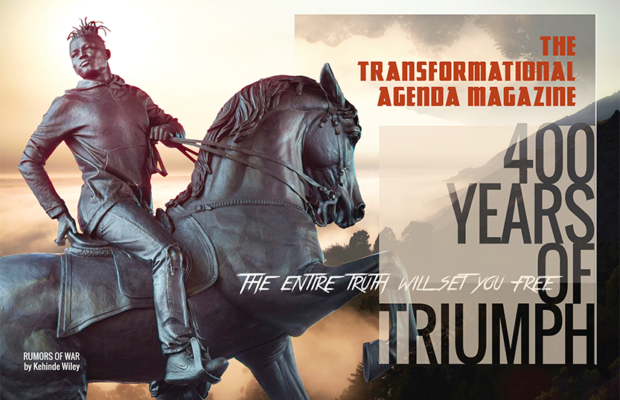 ABOUT THE COVER
Kehinde Wiley is the artist who created the official presidential portrait of President Barack Obama; and who recently had a showing at the Saint Lewis Art Museum of paintings of Ferguson demonstrators.

Rumors of War is a bronze monumental equestrian statue of an African American young man created in response to the statue of Confederate General J.E.B. Stuart in Richmond, Virginia.

In September 2019 Wiley unveiled the work in Times Square in the borough of Manhattan in New York City. The work is Wiley’s largest at 27 feet high and 16 feet wide. December 1, 2019 it will be moved to its’ permanent home at the Virginia Museum of Fine Arts in Richmond. It will be at the head of Arthur Ashe Avenue where it will be situated in close proximity to a volley of Confederate statues and monuments.