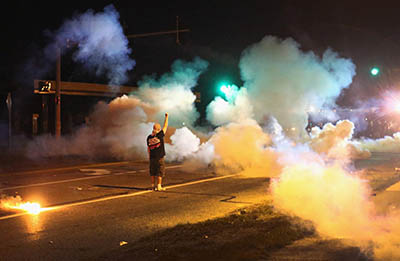 The Spark That Ignited Ferguson

Hundreds flooded into The Canfield Green Apartment Complex while Michael Brown’s body lay in street for over four hours.  An invisible flame spread like a wildfire through the crowd, raging stronger as the sound of every wail interrupted the siren filled neighborhood.  That night, the Ferguson community witnessed civil unrest like it had never seen before.  Years of hurt, distrust, frustration, disrespect, and pure exhaustion poured from the hearts of community members who had simply had enough.

We began migrating to North County in the mid-1960’s seeking a better life, so some proudly called it home for decades.  Others had arrived just in time for The Great Recession; which doubled unemployment, exploded the number of home foreclosures, and made finding a job (any job) exceptionally difficult.
Yet all African Americans found something truly troubling in North County.

Many municipalities were balancing their budgets by countless police stops resulting in tickets galore, large fines, and warrants if you didn’t appear at court or if you just couldn’t pay.  So next time you were stopped you went to jail, which acted as a debtors’ prison, extorting your family’s money; and they weren’t even polite about it.  It was abuse and harassment in its rawest form; and then a child was killed and just left to bleed to death in the street.  And our youth screamed “It could have just as easily been me!”

What unfolded in the hours after Michael Brown’s death was a community’s outcry.  The destruction and chaos represented a cry to be seen, to be heard, to be respected, and to be considered.  The manner in which Michael Brown was handled struck a nerve that had been struck too many times before, and the community reacted.  Anger set the stage for a night never to be forgotten and ignited a movement for change.

Lessons from the Movement

Chants, cries, songs, and demands all spewed from the mouths of a community that was simply fed up.  The world tuned in as the movement’s protestors swelled from hundreds to thousands in a matter of weeks.  The people were filled with passion, frustration, and hurt.  The media painted a jumbled picture, but one thing was loud and clear— the message being sent to the world and all its inhabitants was simple—Black Lives Matter.

It had been almost 50 years since thousands of African American citizens united collectively and walked the streets together demanding to be treated fairly and equally. They set out to not only change the minds of those around them, but to also induce change in their own communities. While the movement of today garners new faces; the racial, social, and economic issues of our community remain as ever present as they were decades ago. How much longer will it take to induce true and lasting change?

The Black Lives Matter Movement is vastly similar to the Civil Rights Movement.  In both instances, the movements are propelled by young people, who took to the streets in protests, die-ins, and sit-ins.  While the various organizations that sprang up from these movements had different methodologies and tactics, whether fighting for the right to vote or against police brutality, one objective remained consistent—to let the world know that African Americans are equal citizens and human beings and demanded to be treated as such.

Yet have we been explicit in our demands?  Have we united behind a specific agenda?  Have we communicated exactly what must change and exactly what must replace it?  We have demanded change, yet we still do not even have body cameras for police nor civilian police review boards with subpoena power.  Meanwhile our schools continue to fail our children while far too much abuse exists within our community.

Recent events have caused us to take a step back and re-evaluate our culture and demand better from each other and those around us.  With the events of Ferguson losing its media focus, we must remain resilient in our journey for the healing of our community.  It is imperative that we listen and learn from one another and are specific in our goals and aspirations, in order to move ahead as a conscious, effective and connected group.  Class is no longer in session.  It is time we take the lessons learned from the movement and turn our concern into concerted action.

Where Do We Go From Here?

What if we were able to change from our current state of destruction and dysfunction and catapult into a more thriving and productive people?  Our physical bodies are no longer bound by chains and legislation has granted us civil liberties.  In spite of this, our community has not experienced the transformation which we so desperately need. How can we achieve the needed transformation?

To transform the African American community we must first change our minds.  It is time that we come face-to-face with the demons of our past and the sacrifices of our ancestors and understand the true disease which we suffer from—negative mental legacies of slavery.  Slave culture existed for hundreds of years and it was not pretty.  It has never been carefully examined nor explicitly deconstructed.  There has been no explicit program of healing.  No program to explicitly transform our culture into a culture of empowerment.

Our community suffers because we have not first changed our minds.  This mindset of powerlessness, inferiority, and failure was planted in our minds hundreds of years ago and we have unknowingly passed these destructive thoughts throughout our generations.  We must heal from this destructive thinking that is expressed in our outward behaviors.

It is understandable that we want “them” and “they” who caused our pain to sincerely apologize and act to repair our community.  Yet, is “their” lack of remorse and refusal to repair any reason for us not to get ourselves together?  As slaves we had no control over our destiny, yet today we surely do.  We must realize and act on this reality.  Now is the time to develop our own think tanks, our own empowering strategies, our own healing programming, and our own love and nurturing of one another?

We must acknowledge the harm to our community.  In order to aspire, we must first realize that we can heal our community, and that no one can or will do it for us.  In order to heal, we must first transform our minds, and then act to transform our community.  Everyone has something to give, so there is a perfect voluntary service opportunity for all; we can each contribute to our healing.  Seek it out and engage, be a positive force in our healing, and encourage every organization that you are a part of to insist that every member do the same.

We can heal our community and healing is exactly what we need.   The time for our healing transformation is now.